The fourth challenge in the Historic Food Fortnightly was Sweets for the Sweet.  I decided to try one of the cookie recipes in Practical Housekeeping, planning to make enough for the PADS meal on Sunday night.  I selected the recipe for Sand Tarts on page 98 of the 1897 edition of Practical Housekeeping since it had pencil marks surrounding it.

Two cups sugar, one of butter, three of flour, two eggs, leaving out the white of one; roll out thin and cut in square cakes with a knife; spread the white of egg on top, sprinkle with cinnamon and sugar, and press a blanched almond or raisin in the center.  -- Miss Clara G. Phellis

Mixing up the dough and cutting out the cookies was straightforward.  I mixed up the cookies using my Kitchenaid stand mixer.  It made a dry dough that was a little bit difficult to manipulate.  I rolled it out and cut out squarish shapes using a fluted pastry cutting wheel, brushed beaten egg white on top, sprinkled with cinnamon sugar and then added an almond.  Baking the cookies was tricky, I tried a 325 F oven but had trouble getting the time right.  The cookies quickly went from raw to brown once they started cooking.

I decided not to make a second recipe of Sand Tarts for PADS, instead I made a batch of my favorite family recipe which came from a German language cookbook that belonged to my Great-great Grandmother or to her mother.

1 pound sugar, 3/4 pound butter, 1 tablespoon cinnamon, three eggs, and one pound of flour or enough to roll out.  Cream together sugar and butter.  Add cinnamon and eggs, one by one, mixing thoroughly until combined.  Add flour and mix until well combined.  Roll out and cut out with cookie cutters.  Bake in a 350 degree oven for about 12 minutes.  Smaller, thinner cookies cook faster than larger, thicker ones.

We traditionally convert the pound of sugar to 2 cups and the pound of flour to 4 cups.  These cookies can be frosted, but they are pretty with a sprinkling of colored sugar put on before the cookies go in the oven.

The third challenge in the Historic Food Fortnightly was History Detectives, or solving a mystery related to a recipe or historic cooking technique.  Initially I had trouble coming up with an approach to this challenge, but then I realized that there was a certain amount of mystery solving and historical research involved in cooking from any old recipe.  I ended up with the Old Hartford Election Cake recipe because a friend of mine is holding a tea to raise money for Greater Midwest Foodways Alliance.  The tea includes an authentic English tea, a performance, and an action.  The performance this year will focus on the Schuyler sisters in a presentation on Alexander Hamilton's women.  I decided use a historic recipe to create a cake for the auction.

Reading through my 1897 edition of Practical Housekeeping, I found the recipe for Old Hartford Election Cake on page 70:

Five pounds sifted flour, two of butter, two of sugar, thre gills distillery yeast or twice the quantity of home brewed, four eggs, gill of wine, gill of brandy, one quart sweet milk, half an ounce of nutmeg, two pounds raisins, one of citron; rub the butter and flour together very fine, add half the sugar, then the yeast and half the milk (hot in winter, blood-warm in summer), then add the eggs, the remainder of the milk, and the wine;  beat well and let rise in a warm place all night; in the morning beat a long time, adding brandy, sugar, spice and fruit well floured, and allow to rise again very light, after which put in cake pans and let rise ten or fifteen minuets; have the oven about as hot as for bread.  This cake will keep any length of time.  For raised cakes use potato yeast if fresh made; it is always a perfect success.  This recipe is over one hundred yeas old.  -- Mrs. Eliza Burnham, Milford Center.

I decided that a cake that Alexander Hamilton might have eaten was a perfect contribution to the action.  The first mystery to solve in making this cake was to find out what thre gills of distillery yeast would be.  Since a gill is a liquid measurement, the recipe was calling for a liquid yeast instead of the dried and cake products that are commonly sold today.  I did some research and discovered that distiller's yeast is a specific strain of Saccharomyces Cerevisae that produces maximum alcohol yields under controlled temperatures.  Although there are liquid forms availabile, it is more commonly sold at brewery supply stores as DADY (Distillers Active Dry Yeast).  I bought mine at Perfect Brewing Supply in Libertyville, Il.  I followed the directions for reconstituting the yeast using 1 part yeast to 10 parts water, by weight.

Once the yeast was ready, I mixed up the dough, using two bowls with half the recipe in each one.  I warmed up the milk in the microwave before adding it to the flour, butter and sugar mixture.  I used an inexpensive sweet white wine.

After the dough had risen for several hours and was more than double in size, I added the brandy, sugar, spice and fruit.  I used a combination of light and dark raisins instead of the recommended combination of raisins and citron.

After the second rise, I filled two bundt pans and two loaf pans with the dough.  I baked them in a 350 F oven, checking them after 45 minutes.  The cakes in the loaf pans were done after about 55 minutes, the two bundt pans took more than an hour to completely cook.  The best looking cakes were allowed to cool in their pans before being taken out.  The loaf that I removed from the pan while it was still hot, collapsed.

The whole house smelled like nutmeg, yeast, and sugar while the cakes were baking and they are absolutely delicious.  It would be pretty easy to modify this recipe to make fewer cakes by proportionally reducing the amounts of the different ingredients.  You could also vary the flavor by adding different spices or changing the fruit.  I left my cake unfrosted, but there are several recipes that discuss the addition of different glazes and frostings either while the cake is cooling or after it is completely cooled.

Posted by Needlewoman at 7:26 AM No comments: 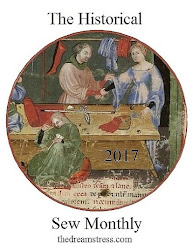